This week is MS Awareness week and many events are being organised accross the country to help raise awareness.
See the MS Society campaign here the MS Trust campaign here or the MS Resourc Centre campaign here!

Keep your eye on the media over the next week for lots of MS news and stories :0)
Posted by Unknown at 13:30

Fancy giving the Virgin London Marathon a go in 2013?  If so you can apply for a ballot place at www.virginlondonmarathon.com

MS hasn't held me back in life"

Source BBC:
George Pepper (founder of ShiftMS) talks of his amazing travels and experience after being diagnosed with MS when he was 22.
Posted by Unknown at 13:24

Amy Winehouse's mum "won't let MS get in the way of life" - A great interview on ITV Daybreak this morning.
Posted by Unknown at 13:20

Source MS Trust:
The European Medicines Agency has issued advice on the management of fingolimod (Gilenya) treatment to help reduce the risk of heart problems after the first dose
The European Medicines Agency (EMA) started a review of fingolimod after there were reports of people experiencing heart problems, cases of sudden or unexplained deaths, and the death of a person in the US within 24 hours of receiving their first dose.
Posted by Unknown at 15:34

MS Trust Chatroom 16th May - Understanding and coping with the change from relapsing remitting to secondary progressive MS can be challenging. With fewer relapses and disability gradually increasing, approaches to treatment and managing symptoms can change. For some people this can feel like being diagnosed a second time with a new range of unknowns and uncertainties.  For more click here.
Posted by Unknown at 15:33

Would you like to get a better nights sleep?

Talking Therapies (Primary Care NHS) in partnership with the Berkshire MS Therapy Centre wants to explore if people in the East and West Bekrhsire area might need treatment to help manage sleep better?
If you are interested please email pippa@bmstc.org for a questionnire to complete that will be forwarded onto Talking Therapies so we can establish if there is enough interest.  Thank you! 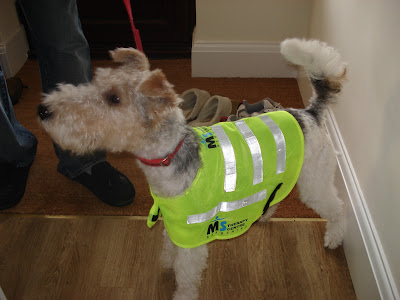 Introducing Alfie, our newest collector!  Alfie recently helped his Mum Yvonne at our Woodley Street Collection!  Yvonne said "  I had lots of people coming up to us to stroke him and ask if he was a dog for the disabled. He was so good, stood the whole 2 hours without any fuss and loved people fussing over him.

A couple of people asked if they could buy him! i said we come as a package!!

Great advertising and creating awareness, he is looking forward to the next one already." :0)
Posted by Unknown at 14:59

From one of our MS Members - Sarah:

Why did you decide to go?
Last summer a friend at my local MS Therapy Centre had lent me ‘Overcoming Multiple Sclerosis’, by Professor George Jelinek; a doctor with the condition. I was impressed by what he had written, not only because it was written for the lay person but, because he was speaking from the combination of experience and medical knowledge.  He ran an MS retreat in Australia and I remember thinking that it would be a long way to go for a week’s retreat.


It was when my neurologist said that I had probably got secondary progressive MS, and that I would shortly need hand controls to drive, that I thought it was time to take some action.  I remembered a phrase in the book, ‘whatever it takes’ and that’s when I made up my mind to go to the retreat in Australia.  With just a few weeks to go I booked one of the last two places on the retreat and a flight out there.


What did I find when I got there?
I was allocated a dormitory bed with seven other women with varying degrees of disability, from fully ambulant, to me - walking with two sticks.


The retreat is dedicated to providing you with all the information that you need to manage the condition and there are several sessions with George Jelinek giving the ‘science’ in a very digestible and understandable way.  It also directly addressed the food issue by only offering a whole-food, plant based (vegan) diet, along with meditation. After three days I felt more mobile and was joining in with the Qi Gong, standing (un-aided) on the grass, rather than sitting.
One of the first things that I recorded was that the influential risk factors in MS are 24% genetic; but 76% environmental, which would suggest that we have more opportunities to dictate how the disease affects us that we thought.


These are the interventions that we can make, in addition to those suggested by doctors.
Interventions


His evidence based approach to MS is this:


1.       Diet.  Do not have fats with a high melting point; in other words all animal and saturated fats. This includes animal milks. Cows’ milk protein resembles myelin oligodendrocytes, so the body tries to attack all milk proteins; in fact;  MS epidemiology follows cows’ milk consumption around the world and the beer, batter, butter cultures (mainly western) have a higher incidence of ‘lifestyle’ diseases.


As the cartoon character Garfield says, ‘Diet is die with a t’. Perhaps, our Western diet is guilty of helping that.

2.       Essential fatty acids, (EFA’s), the Omega 3 oils, (flaxseed, etc). They are known anti-depressants, as well as being essential in the building of cells. Make sure you are getting 17-23 grams per day of these oils.


3.       Vitamin D/Sunlight. Perhaps we have overdone the ‘cover-up in the sun’ message. We need it. Full body exposure for 15-20 minutes (in warm southern hemisphere weather) 3 -5 times per week was recommended. In the northern hemisphere we need to adjust accordingly, and in the winter months make sure that you are getting a minimum of 5000 IU of vitamin D per day; get your vitamin D levels checked. There should be a minimum of 150 nanomils per litre of blood.


4.       Meditation. I laughed and said that it was all a bit ‘dippy hippy’; but, really, who cares? If it makes us feel calmer and helps us to be nicer people, as well as healthier why would anyone object to it? Find a space to do it for a minimum of ½ an hour a day, in two tranches or in one. It has helped me to be less critical and judgemental; which has released me from some of the stress that I was putting on myself.

5.       Exercise - The benefits are various and well-known, but make sure that it is vigorous exercise, if you are able. Swimming is good, (particularly outside, as you get vitamin D at the same time); some people jog; I have taken up rowing, (adaptive boats have extra floats so it is less likely to capsize).
What did I learn?


·         I learned focus – it’s very easy to become ‘busy’ with things that really aren’t important; to ‘acquire things’ which are not helpful to the management of your illness, but create distress.


·          I learned self-determination, which started with my decision to go to the retreat.


·         I learned calmness and directness. It’s no good being vague about what you are doing, either to yourself or to your friends and family. Be very clear about your intentions and your reasons for them.


OMS (Overcoming Multiple Sclerosis) will have a stand at the MS Life Exhibition in Manchester 14th-15th April – those of us who have been on the retreat will be there to tell visitors all about it.

Congratulations to "Our Tracy"!!

Congratulations on completing your first Half Marathon on Sunday!  What an inspiration!
If you would like to see all of the fantastic pictures our photographer took on the day please click here.
It's not too late to sponsor Tracy for her fantastic achievement and you can see her JustGiving page here!
Posted by Unknown at 15:36

Congratulations to Dr Faraz Jeddi - The force was with you!

The Force was certainly with Dr Jeddi on Sunday!

Congratulations on completing the Reading Half Marathon, and thank you for choosing to support the Berkshire MS Therapy Centre!

It is not too late to sponsor Faraz - please see his Justgiving page here!
Posted by Unknown at 15:29

Thank you to all of our Reading Half Marathon Runners and Volunteers! 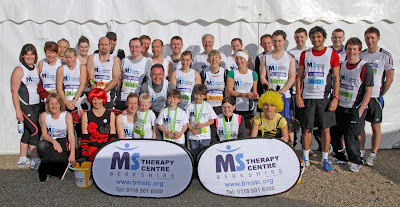 Source MS Trust:
A clinical practice guideline on incontinence in neurological disease is being developed by the National Institute for Health and Clinical Excellence for use in the NHS in England, Wales and Northern Ireland. The guidance covers a number of areas, including: treatment to improve bladder storage and emptying, prevention of urinary tract infections, information, support and access to services.  For more click here!
Posted by Unknown at 15:15 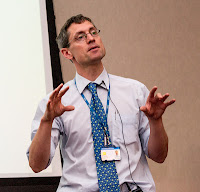 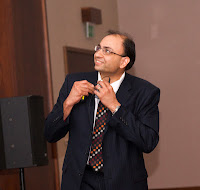 Thank you to everyone who came along to enjoy a fantastic event!  We had 150 guests pluys a further 30 people manning the exhibition stands.   We have had some very positive feedback and hope to repeat a similar event next year.

We hope to make the presentations available to view on the internet in the near future and will let you know when these are ready! :0)
Posted by Unknown at 14:49