A heads up from November that work is planned for Reading Bridge...read on

Bear the chocolate Labrador helps out at one of our collections! :

BEAR the chocolate Labrador made all the difference to a charity collector’s takings.

Liz Cheyney was collecting outside Boots in Bell Street, Henley, for the Berkshire MS Therapy Centre in Reading when she was joined by the dog and his female owner.

Liz, 71, from Caversham, said she usually took only a few pounds but with Bear’s presence, she made £50.

“It was amazing — people came in droves,” she says. “I took more money that day than ever before.”

She would like to find out who the woman was so she can thank her and her dog.


I think he must be the very same Bear who entered this years Henley’s Top Dog competition, so I will put Liz in touch.

New MS Specialist Occupational Therapy clinic available at the same as the MS Nurse Clinic at BMSTC. Next dates are Monday 13th October and Friday 12th December. Please book by calling 0118 901 6000. (Please note it is not possible for the MS Nurse to see BMSTC members who are not eligible to be seen by consultants within the Royal Berkshire NHS Trust)
Posted by Unknown at 14:33

Thank you to all who support Walking for MileS 2014 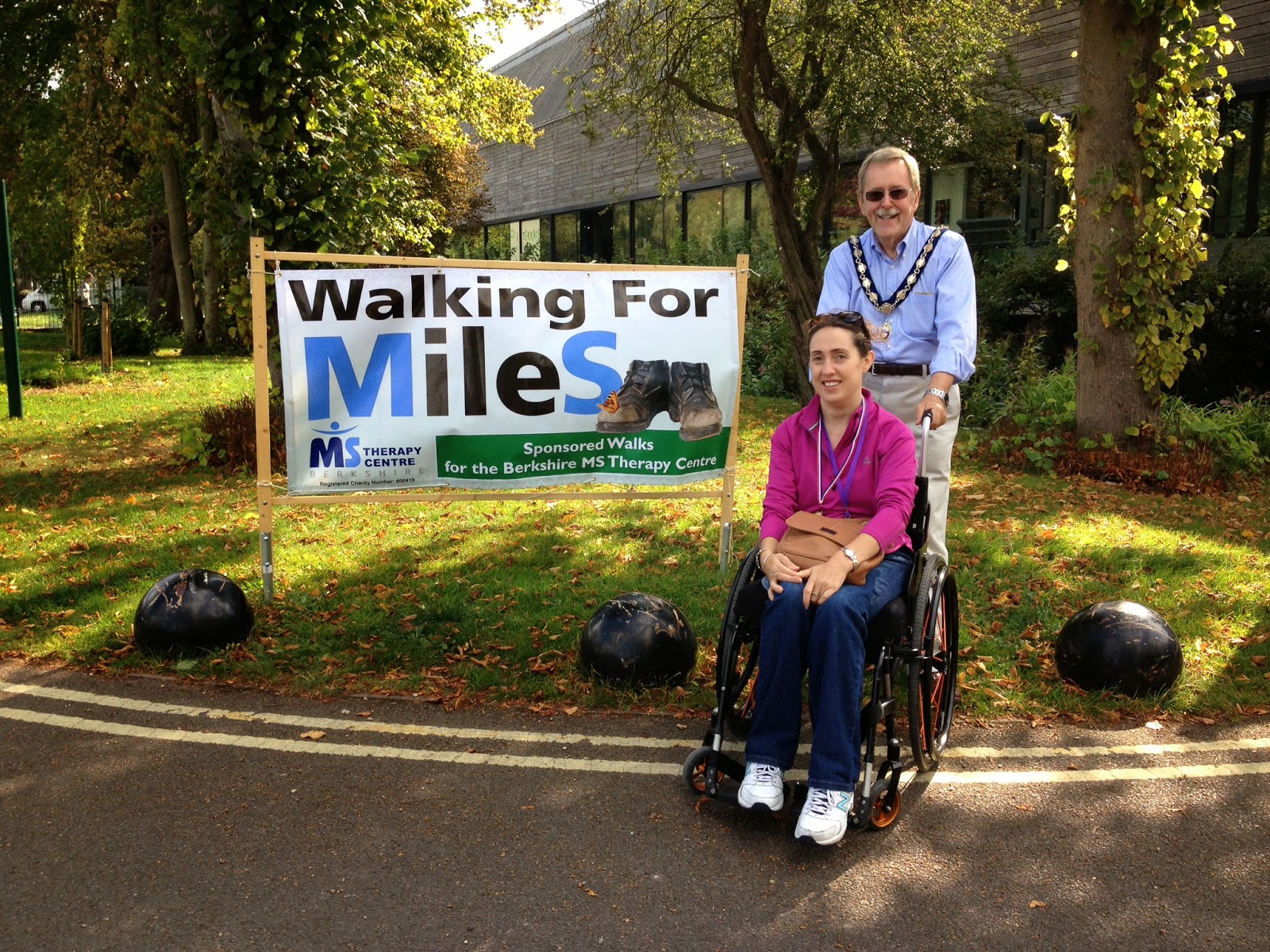 Thank you to everyone who came along and supported this year's Walking for MileS event in Henley.

We had fantastic weather, and a fantastic turnout of walkers, wheelers and volunteers.  We were delighted that the Mayor of Henley, Martin Akehurst, kindly accompanied Catherine Ruggerio on the Marsh lock walk.  We will announce the total raised in due course.
Posted by Unknown at 14:02

It's the Final Countdown....to Walking for MileS - Sunday 21st September at Henley on Thames

Last online entry can be accepted up to midday this Thursday 17th September. After this time, please register on the day at the River and Rowing Museum in Henley - we'll be in the educational block, please follow the signs. Look forward to seeing you there! :0)  Enter online here!
Posted by Unknown at 14:15

Request from the BMSTC Link Group who are organising the Christmas Fayre on Saturday 22nd November 1.00 to 3.30pm, officially opened by Alok Sharma MP.

If you have items such as new, nearly new, wine, CD's or DVD's, cakes etc please brin...g them to the Centre week commencing 17th November. (Please note we are unable to accept bric-a-brac, books, VHS videos or audio cassettes - sorry!)

They are also on the hunt for a volunteer Man-with-a- Van to help bring items and take them away after the sale. Any enquiries please contact organiser Glynis,  g.wilks@btinternet.com

Listen to Ann Scarboro on the Phil Kennedy show - interview starts at 36 mins 43 seconds into the programme. Ann has been nominated by her husband David for the MS Society Awards - Carer of the Year! Best of luck Ann from everyone at BMSTC! :0)  Follow link here! - available until the 17th September.
Posted by Unknown at 14:11

The MS Society need your help!

In April, NICE rejected two of the only symptom management treatments specifically licensed for MS.

We know that access to these treatments is a priority for many people with MS and we have anecdotal evidence that with these treatments unavailable, some people are turning to alternative or unlicensed options.

We need to hear from you to make sure we understand the full picture! Take our survey Click here
Posted by Unknown at 14:09

Thank you 79th Scout Troop Reading for your Ice Bucket Challenge in adi of BMSTC!

79th Scout troop Reading held an ice bucket challenge on the night Kirsten’s son moved up to Explorer Scouts . They decided to do it to raise funds for our Centre. They all loved getting soaked and raised £39.32.

Thanks to James and the other leaders and of course to all the Scouts .
Posted by Unknown at 14:08

We have been very busy preparing specifications for the rest of the refurbishment project.  We will soon be in a position to get competitive quotes and select our contractor.  Watch this space for more news!


You might be interested to know some of the companies we have identified to help us with our toilet/shower area and the kitchen and refreshment area.


Our interior designer is Lesley Ann Gentry, who did the original design for us when we moved into Bradbury House.

BMSTC selected as one of the names charities for the Reading Half Marathon 2014!

Source Reading Chronicle
MACs, The Fire Fighters Charity, The Royal Berks Charity, Berkshire MS Therapy Centre, Babies in Buscot and Naomi House they will be supported alongside official event charity, Scope.
The Reading Half Marathon has been the largest fundraising half marathon in the South of England and it is hoped the 2015 event on Sunday, March 22, will be a record breaker.  Read on
Posted by Unknown at 14:19

Counting down to this years Walking for MileS, 21st September.

It's time to get your walking boots on again and persuade your friends to join in Walking for MileS in Henley on Sunday September 21st., Remember, this is an event that everyone can take part in and as we are celebrating our 30th Anniversary, lets make it the best!

You can enter online here!
Posted by Unknown at 14:17

One of our supporters is making some beautiful glass Jewellery to sell, she will be making a donation to BMSTC from the proceeds. For every one of these beautiful glass MS Zip Angels sold she will be donating £1.00 to BMSTC! Please share this with your friends and family, they would make great Christmas pressies and BMSTC benefits too! Happy days, Thank you Judy! :0)  Visit Judy's website here.
Posted by Unknown at 14:15

Multiple sclerosis could be 'switched off' by retraining immune system

Source The Telegraph:
Scientists believe they are close to developing a drug which could 'switch off' autoimmune diseases like Multiple sclerosis by training the body to stop attacking itself.  Read on.

We are runnng a 5 mile mud and obstacle race for Berkshire MS Therapy Centre because we want to raise money and awareness.  If you would like to sponsor us please visit our Just Giving Page here!

Antithesis, synthesis? A curious observation may lead to a treatment for multiple sclerosis

Source: Economist
IN SCIENCE, as in many other walks of life, what is unexpected is often what is most interesting and important. The idea, first mooted in 2011 by Julian Gold of the Prince of Wales Hospital in Sydney, Australia, that HIV infection—or maybe the drug treatment used to fight it—might protect against multiple sclerosis (MS), was certainly unexpected. Now, in a study just published in the Journal of Neurology, Neurosurgery and Psychiatry, Dr Gold has confirmed his suspicion. That is interesting. It may also be important.  Read on.
Posted by Unknown at 14:11

Making sure the Care Act works for people with MS


Now that the Care Act has been agreed by the Queen (gained Royal Assent), the Government has been drafting new regulations and guidance that outline how local authorities should put the Act into practice.  Read on.

Yoga Relieves Multiple Sclerosis Symptoms, Rutgers Study Finds. BMSTC has a yoga class on a Monday evening at 7pm, and also a Friday afternoon at 2pm.. Please contact pippa@bmstc.org if you are interested.


"Paula Meltzer was only 38 when out of nowhere everything she looked at was blurry. For the single mother, who had a lucrative career as a gemologist and spent hours examining valuable pieces of jewellrey, it seemed as if – in a split second – her life changed."  Read on

This is a picture of Ethan Farley and his friend Hugh McMurtie who came to tell us of the fantastic figure they raised on their recent challenge.

They enjoyed the ride and raising money so much that they hope to make it an annual event.

Thank you to people who decided to donate to BMSTC doing the Ice Bucket Challenge!  Watch one of our members  drenching her husband!

"Hi all! Just to let you know, many of my friends who have been nominated for the 'ice bucket challenge' have done it for BMSTC, which is great! Here's me drenching my husband in ice cold water for which he has made a donation to you xx"  Watch here
Posted by Unknown at 14:01

Dimethyl fumarate (BG-12, Tecfidera) will start to be available on the NHS in England and Wales from November following final guidance from NICE (National Institute for Health and Care Excellence).


Dimethyl fumarate is approved as a treatment for adults with active relapsing remitting multiple sclerosis (normally defined as two clinically significant relapses in the previous two years), providing they do not have highly active MS despite treatment or rapidly evolving severe relapsing remitting MS.  Read more here
Posted by Unknown at 13:59

Thanks to all who attended our 30th Anniversary Party!

Thank you to everyone who attended the party on the 20th August celebrating 30 years of BMSTC!  Thank you also to everyone who gave us a little birthday gift by way of a donation on our Just Giving Page https://www.justgiving.com/BMSTC30thAnniversary/

Many thanks for Bouchier Fencing Ltd

Many thanks for Bouchier Fencing Ltd for donating the posts and rope around our lovely new pond and builder Dave May who put it all in place just time for our 30th Anniversary Party on Wednesday. Doesn't it look lovely!

BMSTC chosen as one of the Reading Half Marathon charities for 2015!

We have just heard that the Centre has once again been chosen as one of the three Official Local Charites for next year's Reading Half Marathon! This means we have free places to give out for potential runners and a stand in the Charity Marquee in the race village, not to mention lots of publicity. Great news!


If you are interested in running or help with marshalling please contact Jackie on 0118 901 6000 or email jackie@bmstc.org