No MS Tai Chi at BMSTC on Thursday 7th April

Advance warning that Jackie, our Tai Chi instructor, is unable to come in on Thursday 7th April so the class has been cancelled for this day.  Sorry for any inconvenience!
Posted by Unknown at 12:42 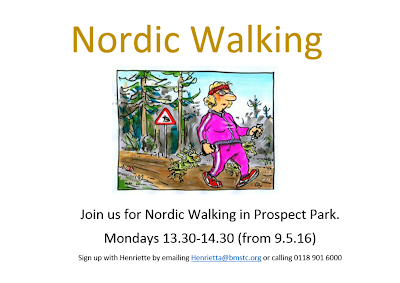 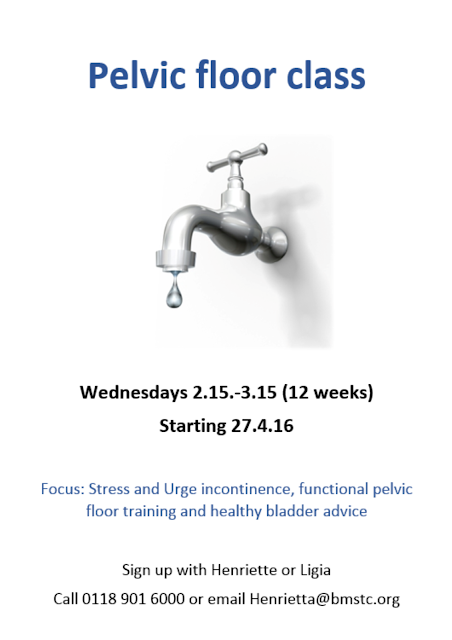 The MS Specialise Nurse and MS Specialist Occupational Therapist will be holding their next Clinic at BMSTC on:

Please note the Centre will be closed for Easter from Friday 25th March and will reopen on Tuesday 29th March.  Please note there will be no Saturday Oxygen or Acupuncture this weekend.


Best wishes to you all for a very Happy Easter from all at BMSTC.
Posted by Unknown at 12:17

Thanks for nominating me for the MS Society Professional of the Year Award!

'We are thrilled our Centre Manager Pippa has been shortlisted for the MS Society UK Professional of the Year award recognising her 19 years of hard work and dedication to the Berkshire MS Therapy Centre, its members and the local MS community.

Chairman, Ian said, ‘Any ship needs a captain and a crew. If either is second rate so will the ship be. In the case of BMSTC we have a very good crew and an excellent captain. Pippa Vincent-Cooke runs the place in a quiet professional way, allowing others space to get on with their allotted roles, but is always aware of what is going on.

Outside the Centre she is always willing to listen to others experiences and suggest ideas to us or them where relevant. Whenever I visit or speak to other Centres one of the first questions is "How is Pippa?" She is held in high regard all over the place.

We are very lucky to have her as Centre manager. Many congratulations on being short-listed for the MS Professionals Award.’
The winners will announced during MS Awareness Week on Wednesday 27th April and we would like to wish her all the luck in the world.   Find out about the finalists here.
Posted by Unknown at 12:07


The new Minister for Work and Pensions, Stephen Crabb, has told the House of Commons that the Government will not be proceeding with the planned changes to Personal Independence Payment (PIP) outlined in last week’s budget.  Read on.
Posted by Unknown at 12:06

Delegate numbers are building quickly for the West Berkshire Neurological Alliance 2016 all-day conference, 'Integrated Pathways of Neurological Care' which will be held at The Arlington Arts Centre near Newbury on Tuesday 3rd May.


This major education and information day is aimed at patients, carers, health and social care professionals and the neurological voluntary sector. Neurological patients and carers may attend at nominal cost, to help cover lunch and refreshments. Clinicians and other professional delegates will receive six Professional Development Credits, important in maintaining professional accreditation.  For more information click here.
Posted by Unknown at 12:04


From the ‘omniwheels’ of the Whill to off-road caterpillar tracks, we look at the latest innovations in personal mobility vehicles.  Read on.
Posted by Unknown at 11:56

In a weeks time, I'll be running Reading Half Marathon and Green Park Challenge in aid of BMSTC.

I'd love your support, I've never ran a half marathon before!

We are very excited to be the proud winners of a new website from the wonderful White Fuse. Please let us know what you would like to see from our new site!
Posted by Unknown at 11:45

The class will cover the different types of bladder issues in MS with main focus on stress and urge incontinence, functional pelvic floor training and healthy bladder advice.

We are all very sad to hear the news about the passing of Paul Daniels this morning.


Paul has been a Patron of BMSTC for nearly 20 years.  He first became involved in 1998 shortly after he moved to the area. BMSTC wrote to welcome him and ask if he would be willing to help us with our "New Centre Appeal".   We were delighted when he said yes!


At that time we had operated for 16 years from a portacabin in Caversham.  We had outgrown the building and the land where we were sited was up for development.  We needed to raise just under £1 million to build a new and purpose built MS Therapy Centre.  Paul and Debbie helped to raise publicity for our appeal, initially appearing posing with hard hats in a JCB along with the Mayor of Reading, turning the first sod on the plot of land where Bradbury House was built.


Paul was our VIP guest when HRH Princess Anne came to officially open Bradbury House on the 3rd March 1999.  A very proud day for everyone concerned.  The Centre has flourished and grown from strength to strength since, providing thousands of treatments to help the local MS community and their families and carers.


Paul and Debbie continued their support over many years and appeared as Quiz Masters for our Professional Quiz Nights, Auctioneer at our various golf events, officially opened our Henley MS support Group and numerous Summer and Christmas Fairs.  Our volunteers also remember him popping in unannounced on a Saturday morning for a chat and a cuppa as he was passing.


Paul was always so enthusiastic and interested in our work, he always added some magic whenever he appeared.  We are very grateful for his help and support over the years and will miss him.  Our heartfelt thoughts go out to Debbie and the family.


Magician Paul Daniels has died aged 77, after being diagnosed with a brain tumour.
He was at his Berkshire home with wife Debbie McGee when he died in the early hours of Thursday.  Read on.
Posted by Unknown at 10:12

Michelle said “Changes to the Personal Independence Payment (PIP) will increase anxiety and fear in thousands of people with MS. This is a vital benefit and access to it needs improving – not restricting further.  Read more here.
Posted by Unknown at 15:00

Source MS Trust:
MS Decisions is a guide to the disease modifying drugs approved for treating relapsing remitting multiple sclerosis in the UK.


Each drug offers a different combination of benefits and risks. These webpages will help you explore your options and help you discuss starting or switching between one of the drugs with your MS team.  Read on.
Posted by Unknown at 15:00

More than 500,000 people are expected to face a cut in their Personal Independence Payments under the changes.  Watch video here.
Posted by Unknown at 14:58

There are only 2 reflexology appointments available before Easter! If you would like to book for Tuesday 29th March please call 0118 901 6000.
Posted by Unknown at 14:54

Please Can you help?

One of our volunteer Oxygen Operators, Ian Mayo, is following his dream and building a house in Scotland near St Andrews. He will be heading off into the sunset at some point in June.

We need to find a couple of willing volunteers who would be happy to train as Oxygen Operators and run regular sessions on a Thursday. If you would like to find out more please speak with Pip or email pippa@bmstc.org. The chamber is simple to operate and full training and support will be provided.

We would also like to express our sincere thanks to Ian for all of his help over a number of years volunteering for BMSTC, and wish him the very best of luck in his new home when he moves.

Berkshire Healthcare Have your Say about services in Wokingham, Reading and West Berkshire

Representatives from voluntary sector organisations, and the people you support, in Reading, Wokingham and West Berkshire are invited to the grading event. The Trust wants to hear whether you think they are getting patient experience right for people from a wide range of backgrounds: disabled people, women and men, pregnant women & women with babies, ethnic minorities including Gypsies and Travellers, older and younger people, people of different religious backgrounds, lesbian, gay, bisexual and transgender people.  For more click here.
Posted by Unknown at 11:07

Help BMSTC recieve a £100 donation and you receive a free e-Book!

Author, Mary B. Lyons, who is one of our long-term supporters, is giving away a free a digital copy of her entertaining book of short stories and cartoons entitled:

Everybody who emails her to request it as part of her fund-raising activity for BMSTC will receive a free digital copy of the book. All you have to do in order to receive a copy is to email Mary at the following email address by Friday 24th June 2016.  Emailers must provide their full name in the subject bar and attachments will not be opened.

If Mary receives 2000 or more emails requesting this free digital copy of SPORTING HITCHES by this date, she will donate £100 to BMSTC.

Your email address will not be passed on to third parties and you will not receive any unwanted advertising from Mary's company, Wordpower.

You must be over 18 years of age and reside in the UK. You can pass the above email address onto UK friends and family who can order for themselves and join in the fun.

After the closing date, 24th June, 2016, the eBook will go on regular sale but you can have it now for free. What are you waiting for?


From Alison Newton, Specialist MS Occupational Therapist:
"Clinics are held once a month, the same time and date as the MS Nurses clinics. Appointments are 20 minute slots, but longer time can be booked if needed. I can give general advice on disability equipment, adaptations, housing, fatigue management and memory problems.


If the person lives in Reading Borough Council I can arrange for allocation for assessment although they may need to go on a waiting list for this. If they are out of RBC, I can make a referral to the relevant Social Services."

Next appointments for the Specialist MS Occupational Therapist or MS Nurse clinic will be available on the 9th March at BMSTC. Call 0118 901 6000 to arrange an appointment.


Last week the Public Accounts Committee has published its report into services for people with neurological conditions.

The report by the influential parliamentary committee recognises the on-going challenges facing neurology services finding that, despite a similar review in 2012, there is still “wide variation across the country in access, outcomes and patient experience.”  More click here.
Posted by Unknown at 14:20


The Welfare Reform and Work Bill was back in the House of Lords yesterday and is now caught in a state of parliamentary “ping pong” with the bill bouncing back and forth between the Houses.

The House of Commons voted last week to reduce Employment and Support Allowance (ESA) for people in the Work Related Activity Group (WRAG) by £30 a week.  Read on.
Posted by Unknown at 14:19


PALS offer services for disabled people and their families in the Slough area. They have their own clubhouse at the George Brooker Centre which provides the opportunity to socialise with others. They also use facilities at the local leisure centre with exclusive use of all three pools for a disabled swim session. Sounds good!  For more information see their website here.
Posted by Unknown at 14:17

Please sign today! A petition to help the disabled at Rivermead Gym, Reading by installing a MotoMed Bike.  Sign the petition here!
Posted by Unknown at 13:58

One of our long-term supporters, Dorota Bandura, also works as a Carer and has asked us to share her information:


"Highly recommended & experienced carer - I have a background in nursing and offer a variety of skills including dementia care, personal care, housekeeping duties and companionship.
Exellent references available.  Call Dorota on T:07858484666"