Pelvic Floor Classes for Women at the Centre

The focus will be:

There is more information available from the MS Trust about the benefits of pelvic floor training to treat bladder symptoms click here!
Posted by Pip at 11:58

Downing Street has defended plans to change access to disability benefits, saying that "nobody is losing out".

The government wants to reverse the effects of a court ruling which expands the number of people who can claim Personal Independence Payments.

The PM's official spokesman said the welfare system was a "strong safety net for those who are in need of it".  Read on.
Posted by Pip at 10:56

#ACTRIMS2017 – There is Increased Evidence Linking Viruses to MS Risk

Multiple sclerosis (MS) is thought to be caused by genetic factors, but environmental cues are increasingly recognized to have an impact on disease onset and development. One environmental factor suggested to play a role in MS is infectious agents, such as viruses. Now, different teams of scientists have explored the potential link between different viruses and the risk for MS.  Read on.
Posted by Pip at 15:03

BBC journalist Caroline Wyatt has spoken of how the "brain fog began to lift" after she had pioneering treatment for multiple sclerosis (MS).

The former BBC defence correspondent was deemed unsuitable for an NHS trial and paid $60,000 (£48,000) for a stem cell transplant in Mexico in January.

We didn't expect these changes and are working hard to understand their potential impact. They follow proposals last year, which we and other disability charities sent a strong message against.  Read on.
Posted by Pip at 14:54 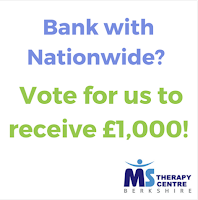 Calling all Nationwide Building Society customers – vote for us in branch across the area we may receive a wonderful £1,000 donation.


Vote for us in the following Nationwide branches: